Since the Xerox Corporation monopolised the industry for much of the 20th Century, clever marketing and an increasingly consumerist society has led to a vastly competitive print market. Manufacturers have subsequently developed fleets of highly advanced machines themselves, many designed for specific purposes. This section will aim to look at some of the main manufacturers and some of the contributions they have made to the print industry.

The Ricoh Company Ltd is a Japanese multinational imaging and electronics company. It was founded by the RIKEN zaibatsu in 1936, initially named Riken Sensitised Paper. Ricoh produces electronic products, primarily cameras and office equipment such as printers and office software.

In the late 1990s through to the early 2000s, the company grew to become the largest copier manufacturer in the world, and is regarded as one of the top providers of photocopiers in the UK today. As well as laser printers that use traditional toner cartridges, Ricoh has also recently introduced a new range of office printers that use the company’s own Geljet technology. Different to traditional toner, GelJet toner dries on contact with paper and is water insoluble, meaning that it does not run when in contact with water. This will inevitably be a lasting legacy of the Ricoh brand.

See our range of Ricoh photocopiers

The Sharp Corporation is a Japanese multinational corporation that designs and manufactures electronic products. The company was founded in 1912, originally taking its name from one of the founder’s first inventions – the Ever-Sharp mechanical pencil, which was invented by Tokuji Hayakawa in 1915.

Sharp has made many contributions to the technology industry, including the world’s first LCD calculator in 1973, and the world’s first commercial camera phone, developed in 2000 by Sharp’s Mobile Communications Division.

The company also has strong links with Apple, developing and manufacturing touch screens for their extremely popular iPad devices, and was well known sponsor of the Manchester United Football Club in the UK. Since 2016, Sharp has become an integral part of the Taiwan-based Foxconn Group, a multinational electronics contract manufacturing company. With Foxconn’s leadership, Sharp has bought the technology companies Nokia, whiteboard touch technology developer SMART, and Midshire highlighting that they are still a major competitor in the print and technology industries today.

For more information on the future of Sharp refer to section fifteen.

See our range of Sharp photocopiers

Lexmark is an American corporation that manufactures laser printers and provides enterprise software. The company was formed in 1991 and after a buyout from IBM, became a publicly traded company at the New York Stock Exchange in 1995. Lexmark has seen much development in recent years, between 2010 and 2015 the company acquired Perceptive Software, Pallas Athena, and ISYS Search Software to build upon its technology offering. The company also unveiled a complete overhaul of its logo and branding to reflect its increasing venture into Information Technologies. In 2016, Lexmark was acquired by both Apex Technology and PAG Asia Capital, completing a $3.6 billion deal. Today, Lexmark has all but stopped production of its inkjet printers, instead opting for laser printers and software solutions for businesses.

See our range of Lexmark photocopiers

The RISO Kagaku Corporation is the inventor, manufacturer, and distributor of the RISO Printer-Duplicator (the Risograph). Established in Japan in 1963 RISO is now a billion-dollar company, distributing to over 150 countries worldwide.

RISO’s products differ from most other multi-functional brands, their niche printing products are aimed at specific market places including education, government and healthcare. The corporation also manufactures the world’s fastest full colour cut sheet inkjet printers, known as the ComColor. Not only do they use ink rather than toner, their machines have a heat-free printing process that is completely unique, meaning that their present day contributions have been revolutionary for many industries and sectors.

The Toshiba Corporation is a Japanese multinational conglomerate corporation. Founded in 1938, originally as Tokyo Shibaira Electric K. K. The company was not known as Toshiba Corp until 1978, and now has four main business groupings: the Digital Products Group, the Electronic Devices Group, the Home Appliances Group, and the Social Infrastructure Group.

Toshiba is currently a widely known corporation and household name, using its business prowess to champion environmental protection. The company has thus devised many schemes, such as the CarbonZero program in order to prevent further damage to the environment.

See our range of Toshiba photocopiers 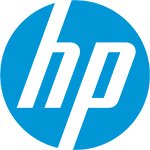 The Hewlett – Packard (HP) Company is an American multinational information technology corporation that provide a wide variety of hardware components as well as software services. Since 2007 HP has been one of the world’s leading PC manufacturers, and after introducing both inkjet and laser printers to its product line in the 1980’s, has seen such machines become a mainstay in millions of homes and businesses worldwide.

HP printers range from A4 desktop devices right up to large-format printers.

More recently, HP has split into two distinct companies, the Hewlett Packard Enterprise and HP Inc. the former focussing on printers and computers, and the latter focussing on data storage; selling the software side of the business. HP also took over Samsung’s $1bn printer business in 2016, and has developed new PageWide technology that aims to revolutionise the print industry. For more information on the PageWide devices, please refer to section four.

The Xerox Corporation is an American global corporation that focuses on business services and document technology products. The organisation was originally founded in 1906 as The Haloid Photographic Company, which focussed on manufacturing photographic paper and equipment. In 1961 the company was renamed as the Xerox Corporation and dominated the market so much that ‘Xerox’ became the household term for photocopying.

The Xerox Corporation’s contribution to the print industry has been staggering, with many of the first photocopiers and laser printers having originated from the company’s research. Still to this day Xerox maintains a global status for photocopiers, with machines that are well designed and efficiently engineered. They also offer many advanced features on their machines and options for businesses that may not come as standard with other brands.

Brother is a global corporation that originated in Japan, and now provides electronics and electrical equipment, such as printers, desktop computers, and sewing machines, to name a few. Brother’s history began in 1908, when it was founded as the Yasui Sewing Corporation, finally being renamed as Brother Industries Ltd in 1962.

Today, Brother is a globally recognised brand, known for its technology and products, and for its contributions to the industry as a whole, such as the invention of a cheaper way of printing Radio Frequency Identification tags. These tags are the pioneering technologies that people place into consumer products, and their pets, for identification purposes. The company also recently acquired a UK based printing company, Domino Printing Science, for $1.55 billion, showing that Brother intends to be a driving force within the print industry today.

The Kyocera Corporation is a Japanese multinational electronics and ceramic manufacturer. It was founded as Kyoto Ceramic Company Limited in 1959 by Kazuo Inamori and renamed in 1982. Kyocera’s original product was a ceramic insulator, designed for Cathode ray tubes.

The company has since expanded its product line, along with its global status, to include a wide range of useful electrical and business systems.

Konica Minolta is a Japanese technology company that manufactures business and industrial products such as office equipment and management software. The company was born from a merger in 2003 of Konica, a photographic materials organisation, and Minolta, a manufacturer of electrical goods, in order to expand the productivity of the two companies.

Today the corporation has a business presence in the Americas, Asia pacific, Europe, Middle East, and Africa.

Samsung is a South Korean multinational conglomerate company headquartered in Samsung Town, Seoul. It comprises of numerous affiliates and businesses, most of which are united under the umbrella Samsung brand, it is also the largest South Korean business to-date. The company was founded in 1938 by Lee Byung-Chull, and originally dealt in dried fish and groceries. It was not until 1980 that Samsung took steps into the technology industry.

Samsung is one of the world’s largest and leading brands, and has thus been able to expand its product line to apparel, chemicals, electronics, and telecommunications equipment. It is for this reason that Samsung is a technology staple for global businesses and consumers alike. More recently Samsung sold its printer business to HP for $1 billion, instead choosing to focus on its extremely popular mobile phone business.

Canon Inc. is a Japanese multinational corporation that specialise in the manufacturing and distribution of imaging, and optical products. Canon’s heritage can be dated back to the 1930’s when a small group of ambitious scientists aimed to establish a foothold within camera technology. It was not until 1976 that Canon entered the UK market, with a limited offering of micrographic equipment, the sale of calculators, and photocopiers, all intended for the business market.

Since 1982 a separate camera sales organisation was merged with Canon, forming its UK arm. Since then the company has become a UK and worldwide leading provider of digital imaging solutions for home and office, and is recognised globally for its industry leading production printers.

Sony is a Japanese multinational conglomerate corporation with a diverse product line, including but not exclusive to: consumer and professional electronics, gaming, entertainment, financial services, and telecommunications equipment. Sony began as Tokyo Tsushin Kogyo in 1947, selling electronics from a Tokyo department store building. In 1958 the company was renamed and rebranded as Sony, helping the tech giant leave a huge and diverse impression on the world stage.

The corporation is widely known for its contributions to the video gaming and entertainment industries, however their contributions are also considered in high regard within the business world.

The below graph highlights the printer market share by vendor, worldwide for 2015. The graph shows that in 2015 HP controlled 20.4 percent, and Canon controlled 20.3 percent of the total market, valued at $34.5 billion in total. 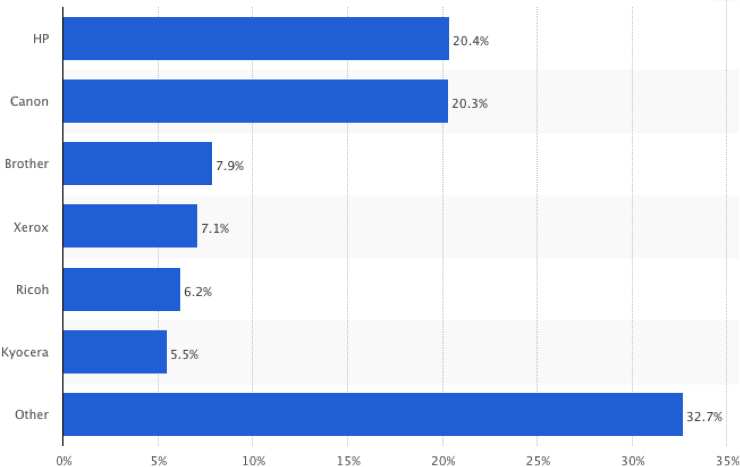