1. Introduction to Printers and Photocopiers

1.1 A Brief History of Printers and Photocopiers

Printing, or rather image duplicating can be dated back to as early as 3000 BCE. The early Mesopotamian civilisation used round seals for rolling an impression into clay tablets to replicate images as stamps. The next big advancement in print came in the 1440’s with the introduction of the printing press. This was a very simple method of printing, and transferred ink from the surface of the press to the paper, or other medium. There are two main methods of office printing as we know it today: laser and inkjet. Inkjet was not conceptualised until the late 1950’s, arriving after the first high-speed printer, which was developed by Remington-Rand in 1953. The modern inkjet printer did not revolutionise the world until the 1970’s when digital images could be replicated from computers – it is here that printing as we know it was born.

Laser printing was not hypothesised until the 1960s, when a Xerox Corporation employee named Gary Starkweather had the idea of using a laser beam to ‘draw’ an image of what was to be copied directly onto the copier drum. This technology became the method by which laser printers work today, and the first printer intended for mass market was not developed until Hewlett-Packard (HP) released the HP LaserJet in 1984. Other laser printers quickly followed this from industry leaders such as Brother Industries and IBM, to name a few. With the increasing rate of technology used in the office, the laser printer has developed into more of a multifunctional device, which is able to scan, fax, copy, and print. This has ensured that laser printing technology is one of the most widely used and important technologies in the modern-day office environment. 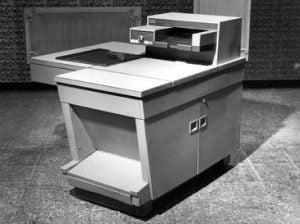 New York patent attorney Chester Carlson invented the photocopier in 1938, however he named the process electrophotography. This was soon renamed Xerography and, at first was not a popular invention. It was not until 22 years after Carlson conceived electrophotography that the Xerox Corporation introduced the first commercial push button photocopier machine – Model A.

Since Model A, the functions and capabilities of modern photocopiers are vastly different with the ability to print on two sides of the page, staple documents, create booklets and send scans and faxes, all at the touch of a button.

1.2 How do Printers and Photocopiers work?

In a typical thermal inkjet printer, ink is fed into thousands of minute reservoirs
in the print head from the cartridge, and then heated rapidly, which causes the ink to form a bubble. This bubble then propels the tiny droplets through a nozzle onto the page. These dots form the lines, characters and subtle gradations of colour that we see in a finished printout.

Laser printers are a lot like photocopiers and use the same basic technology. The light reflects off the page onto a light-sensitive drum; static electricity makes ink particles stick to the drum, and the ink is then transferred to the paper and fused to its surface by using heat. A laser printer works in almost entirely the same way, but with one notable difference to a photocopier – there is no original page to copy, the laser has to write it out from scratch using digital data and code.

For more information on the different types of printing processes please refer to section three.

Feel Free to contact us if you need Printer or Photocopiers