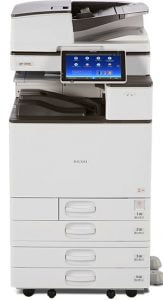 If you choose advanced finished features, your machine can also: sort, staple, hole punch and bind should you wish it to. These finishing options are better suited to floor standing devices as often these in-built features are added as additional units to the engine of the photocopier, configured to your exact requirements.

Office photocopiers are designed to be used by larger work groups and as a shared device, and can have print management software installed such as PaperCut MF and Equitrac to manage users printing behaviour. Print management software can be used to implement rules such as duplex only printing, black and white printing for certain jobs such as email and requiring user authentication before a job can be released from the photocopier. It can also limit users and departments to a restricted number of prints daily, monthly or annual as set by the person responsible for its use.

Midshire offers a Managed Print Service contract to all its customers, irrespective of type of or number of photocopiers. A Managed Print Service is a comprehensive service agreement that covers everything from the equipment installation, operator training, right through to general maintenance, emergency calls, as well as all toner cartridges and collection of meter readings.

Office photocopiers can be purchased outright, or financed via a lease. The majority of businesses throughout the UK choose to lease their printers rather than purchasing, as it is a more cost-effective and tax efficient way of financing office equipment.

Midshire partners with a number of leasing companies and brokers including: Siemens Financial Services, CF Corporate, PEAC, Shire and Tower Leasing to ensure businesses are able to finance their devices over 3-5 years.

By leasing, companies avoid the upfront cost of purchasing and often find they are able to afford a better machine than they initially expected. Midshire provides education facilities with a government backed School’s Operating Lease, from Siemens Financial Services, a requirement when looking at financing any equipment for education.
Learn more about managed print service in our guide