You Are Here Latest News and Event Soapstar Charity Netball – Meet the Stars with Midshire!

Midshire Business Systems Northern is pleased to announce that for the second year running it is the headline sponsor of the ITV Charity Netball Soap Showdown… the re-match, in aid of Text Santa.

As the headline sponsor, Midshire will be supporting the much-anticipated Soap Showdown, which is set to take place at the Thunderdome, Gorton on the 22nd November. Coronation Street and home team Manchester Thunder v Emmerdale and the Yorkshire Jets – the fierce rivalry continues. 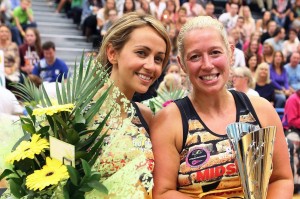 The two teams are battling it out on court to be named Soap Showdown champions. Emmerdale is hoping to avenge last year’s narrow defeat. Katy Cavanagh (Coronation Street’s Julie Carp) and Charley Webb (Emmerdale’s Debbie Dingle) will be captaining the teams once again, with a few new additions making their first appearances, including: Hayley Tamaddon for Coronation Street and Sammy Winward and Eden Taylor-Draper for Emmerdale.

Midshire Business Systems is a leading provider of office technology and has been based in the Stockport area for over 17 years. As the headline sponsor of Thunder Netball for over 10 years, Midshire has provided kit sponsorship, court side signage, the printing of match day programmes and many other marketing materials. 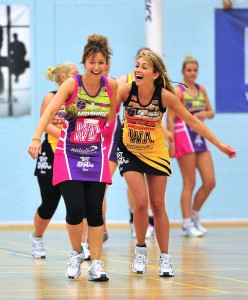 A 1,000 strong crowd at the impressive Thunderdome, home to Thunder netball, will cheer the match on, including some of the male cast members who will be putting in an appearance to show their support. Tickets for the event can be purchased through the Thunder Netball website.

The event is being held to raise money for ITV charity Text Santa, an appeal that has raised £15,000,000 since 2011. The Text Santa appeal is supporting six charities: Teenage Cancer Trust, Guide Dogs, Wellchild, Marie Curie, Alzheimer’s Society and Together for Short Lives.

In the build up to the event Midshire will be running a twitter competition for the chance to win 2 VIP tickets and team meet and greet. To be in with a chance of winning head over to the Midshire twitter page and follow the competition instructions below.

• Follow Midshire @Midshire
• Tweet @Midshire the answer to the following question: Which soap won the last soap showdown match?
• Use the hashtag #SoapShowdown in your tweet
• A winner will be picked at random and announced a week before the match.

Midshire is committed to supporting local organisations and events in the North West region, having already sponsored Thunder Netball Club, Midshire F72 and Can You Sing Manchester and has raised over £100,000 for local and national charities since 2012.