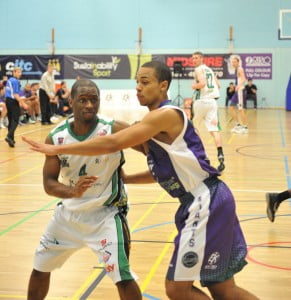 Midshire Business Systems will start the New Year with a clutch of local sports sponsorships.  The Stockport-based copier and document management business has just signed a deal with Manchester Giants, bringing their sporting sponsorships ‘ballpark’ to five.

The Giants basketball club join a trio of netball sponsorships that see Midshire supporting local teams Northern Thunder and Oldham and netball’s England (Northern) team. As the Giants basketball deal was signed the company also announced that it will support junior football in Cheshire.  Midshire is to sponsor Macclesfield Junior FC and Macclesfield Tigers under 10s for the next two years.

Manchester Giants professional basketball club was brought back to the city by a consortium of Manchester enthusiasts, led by former Giants player and coach Jeff Jones.

The Midshire sponsorship will support Giants’ home games at the Wright Robinson Sports College courts they share with Northern Thunder in Gorton, Manchester.

Next year the company, which also operates IT and telecommunications services for SMEs across the region and nationally, will headline-sponsor the biggest football match ever when F72 – the Guinness World Record attempt for the longest football game – kicks off in Cheshire in Spring.  The estimated 72 hour match is being pulled together by Midshire’s top salesman Nick Rose, a keen footballer, in aid of Francis House Hospice.

Midshire MD Julian Stafford said:  “We’ve been a staunch supporter of team sports with a particular focus on the community.  We are proud to add the Manchester Giants to the list. One of our longest serving sales team used to play basketball for England Junior team and has enjoyed taking his young son to the games. We wish them all the very best of luck for the season and look forward to many exciting games ahead.

“We’re also really looking forward to playing a major part in the attempt to stage the world’s biggest football match in this, the company’s 15th year.”

Midshire has grown from a staff of three and ‘no customers’ on the day it opened its doors to a £5m turnover business.