The Soap Showdown netball match was a competitive affair with both Coronation Street and Emmerdale pushing hard for the all-important win. Coronation Street were accompanied by reigning Superleague Champions, Manchester Thunder, whilst Emmerdale were supported by their local team, Yorkshire Jets.

England and Thunder players, Sara Bayman and Helen Housby were two of the players supporting Corrie on the court. Whilst Lauren Potter and Claire Brown were two of the Jets players helping Emmerdale.

Emmerdale were keen to avenge last year’s narrow defeat, and came out strongly. Some impressive shooting from Charley Webb helped to secure a 5 goal lead early on. It was clear from the start that both teams were eager to claim victory. The first half was definitely Emmerdale’s, and they led the way at the break. 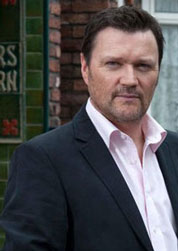 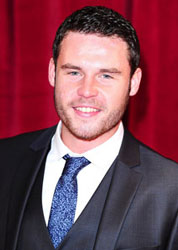 During half time, Ian Puleston-Davies (Owen Armstrong from Coronation Street) and Danny Miller (Aaron Livesy from Emmerdale) provided the entertainment by auctioning off signed netball dresses. All four dresses were snapped up raising over £1200.

Coronation Street returned to the court energised and ready to compete, with Hayley Tamaddon taking the goal shooter position and scoring a number of consecutive goals. Her goals left her literally jumping for joy!

The event was organised to raise money for the ITV Text Santa appeal, with the Text Santa mascot making an appearance at the end of the match. The match was a complete sell-out, with 1,000 people packed into the Thunderdome.

Watch this video for interviews with the teams after the match.

As the headline sponsor of the event, Midshire was delighted to present the trophy to the winners – Emmerdale. Adrienne Topping, Midshire Marketing Manager and Anthony Donelan, Midshire Senior Sales Executive were on hand to present flowers and the trophy at the end of the match.

Midshire is thrilled to continue to be Manchester Thunder’s headline sponsor through the coming season.