Midshire’s Rose Picked for Stockport Business Person of the Year

Midshire’s Nick Rose has been shortlisted in the Stockport Business Awards for ‘Business Person of the Year’.

The 26 year old, who this year raised over £45,000 for a local children’s hospice and put Stockport on the map with a new world record, is one of just three finalists drawn from hundreds of entries.

The Business Person of the Year Award recognises one individual who has been instrumental in the success of a business, with judges looking at overall performance of the company over the last three years.

Nick, who arrived at Midshire with no previous experience more than six years ago, has, in the last few years, consistently been the company’s top performing sales generator and is now a member of the senior management team.

This year (May, 2013) he organised a Midshire-sponsored world record attempt, staging the longest ever football match (some 72 hours) to put Stockport on the map, raise £ thousands for Francis House children’s hospice and generate awareness of, and engagement with, the company. 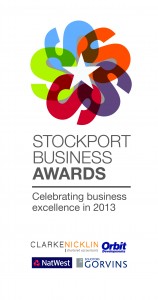 A super-fit football enthusiast, the final score for the match, with Nick captaining the winning team, was into four figures, with blisters to match.  The profile generated for the company reached an audience that numbered into the millions with media coverage reaching through regional TV and press, across the BBC network nationally and internationally and extending to newspapers as far away as Pakistan and Africa.  Total value of the coverage has been put at in excess of £1m. Nick is now awaiting confirmation of the record from the Guinness Records adjudicator.

Six months after starting at Midshire Business Systems as a telesales executive Nick, who lives in Stockport with his wife Vicky, was promoted to sales executive. Just over a year ago he was promoted to sales team manager.  His efforts have helped deliver a turnover in excess of £5m for the company and Nick’s contribution, as the company’s top sales person, has been key to accelerating growth in the last five years.

Nick continues to lead the sales effort, alongside MD Julian Stafford and the wider sales team, and the company is winning increasing numbers of tenders.

Says Stafford:  “Nick is unusual.  His natural instinct is to help people.  The scale of help – witness 36 men playing football nonstop for the equivalent of 48 ‘normal’ matches – is always above expectations.

“He’s honest and he knows his stuff, so people are happy to work with him.  One of the reasons he’s as successful as he is that he’s always genuine.  If the current equipment is working just fine, doing everything that’s asked of it and we can’t bring something in that will save money, Nick is the first to suggest a client leaves things as they are.  It’s advice like this that people value.  They remember it and they stay with us.”

Clients too are quick to add their praise for Nick and support his nomination for Business Person of the Year.

Chris Walker, IT manager Gorvins Solicitors: “I’ve worked with Nick now for a good six years.  He’s always available on the end of the phone, if there are any issues – which are few and far between – he’s there to resolve them.  He’s a nice guy and he really looks after us, we’d certainly do return business with him.  And his effort with F72 (Midshire F72 longest football match in the world) has been outstanding.  It was a huge amount of hard work and he should be very proud, it’s a massive achievement.”

Andrew Perry, SAS Daniels: “What a fantastic achievement with F72!  Nick is always a pleasure to work with, he took time and trouble over getting the right equipment into this firm, and he always responds very quickly.”

Paul Quinn Stockport School: “Julian, the MD came in to see us as the start but then Nick took over and it probably helped that he was a pupil here!  He left about two years before I got the job here.  However it’s down to Nick that so much more work now goes through Midshire, he’s made a big impact.  He’s a cracking lad, very dedicated and he loves his job.  I went to see him during the football challenge and they were all out on their feet.  He came over and said ‘you should see us during the night phases’ – so I made up my mind, got up at 4.30am and got down there for a few hours from 5am on Sunday morning to give them some support.  What he’s achieved is absolutely brilliant.  We’re so impressed half of our £1 no uniform day initiative is now going to Francis House, Nick’s charity, and one of our pupils has been invited to do some table magic around the tables at F72’s gala dinner.”

Debbie Torkington – St. Joseph’s Primary School: “He’s really nice, honest and knows his product.  He always gets back to you.  But more than that, and being very professional, he goes above and beyond.  For instance one time he was here, it was absolute chaos and we realized we didn’t have any prizes – he just went out and got Easter eggs for us so we would have our prizes.  He’s not just there to sell something.”

The NEC SL2100 phone system is perfect for the small-medium sized business. And they offer a wide ra...

The NEC SV9100 is an amazing, powerful system which can take your business to new heights. It also o...

At Midshire, we have our own InHouse Customer Support Team to enhance and improve your customer serv...