Midshire Sales Manager, Nick Rose has been awarded the title ‘Manchester Champion’ at the second annual Made in Manchester Awards ceremony.

The Made in Manchester Awards is a night to recognise and celebrate Manchester’s young professional talent. Organised by membership body, and Midshire customer, Pro-Manchester.

Over 400 people attended the event on Thursday 6th February, hosted at the Midland Hotel in Manchester.

The Manchester Champion category is aimed at an outstanding individual who has volunteered in the local community or with a Manchester based charity to help create real improvements for the City of Manchester and its inhabitants. 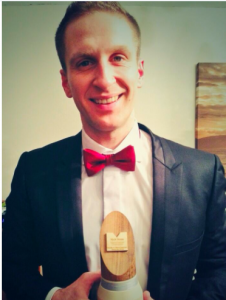 The 27 year old raised over £45,000 for local children’s hospice Francis House, in 2013, and put Manchester on the map with a new Guinness World Record for the Longest Marathon Playing Football, lasting 72 hours.

Nick commented “I’m delighted to have won the Manchester Champion award on behalf of everyone that got involved in our Guinness World Record breaking event.
A huge thank you to MIMA and Future Pro-Manchester, for deeming us worthy of this prestigious accolade. Without the support of lots of wonderful people, and 35 unbreakable amateur footballers, none of this would’ve been possible.
Special mention to all of the many event sponsors, Francis House Children’s Hospice, Trafford Community Leisure Trust, Stretford High School and most of all the amazing people of Manchester.”

The evening raised over £2,000 for charity partner After Adoption, a Manchester charity, who provides a range of support services to people connected to adoption.

Entrepreneur of the Year
Guy Levine, Return on Digital

Calling all existing or wannabe Software Engineers. Are you looking for a new challenge in an inno...

We take a lot of pride in the relationships we build with our partners - many of whom we've had the ...