Office technology sales and service provider Midshire has teamed up with legal firm Russell & Russell to raise a total of £1,500 for the Bolton Hospice and The Christie NHS Foundation Trust charities. 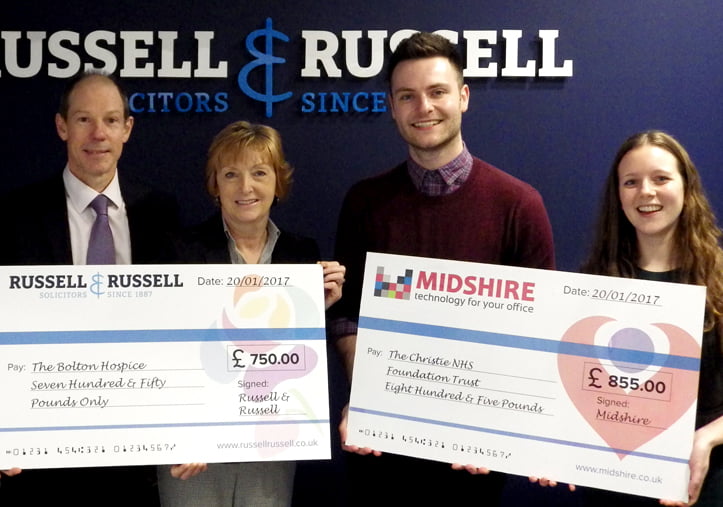 The £1,500 was raised when Midshire conducted a free print audit for the North West based solicitors, who specialise in residential conveyancing; family matters, wills and probate administration, and commercial property law.

The audit resulted in 28 Ricoh photocopiers and multifunctional devices replacing their old fleet of over 75 inefficient and dated Brother, Canon, HP, and Samsung machines. The old printing equipment was then sold or scrapped, with the proceeds being split between the companies’ two selected charities.

Midshire’s Sales Manager Nick Rose has said:“When I saw the number of old machines that Russell & Russell. had to dispose of, I came up with the idea of selling them on their behalf and donating the proceeds to charity.

“After the total was collected it was obvious to split the money between the two companies so that we could both make a difference to our chosen organisations.

Midshire chose to donate to the Manchester based Christie Trust because of their outstanding and world renowned work in Cancer Research and development. The Christie also provide treatment and end of life care to seriously ill and terminally ill patients. The work done by The Christie Trust hit closer to home when Midshire’s own Warehouse Manager Steve Betts tragically lost his beloved wife to cancer last year, leaving behind three children.

Furthermore, the company raised £105 from its staff Christmas jumper day which took place on December 16th 2016. This money will be added to the £750 that is already being given to The Christie Trust, bringing the total contribution from Midshire to £855 and helping the NHS organisation with their important research in beating cancer.

A credit to Bolton and wider communities, Russell & Russell’s chosen charity, The Bolton Hospice, also provides excellent care for patients diagnosed with a wide variety of illnesses, offering to help people live as actively as possible until the end of their lives. Additionally, the hospice gives bereavement support for the families and friends of lost loved ones, whilst providing education and training services to those who require it.

Russell and Russell’s Practice Manager, Andrew Perry comments:“We chose Bolton Hospice because of the amazing work it does with seriously ill patients and the support it provides to their families. It delivers an invaluable service for the local community, but being a charity it receives very little funding, so every penny raised is vital to its survival.

“As a firm, Russell and Russell has a longstanding relationship with Bolton Hospice, but our staff are very passionate about it too. Collectively, we’re involved in fund raising activities all year round and when Nick approached us with the idea of donating the money from the sale of our old printers, we were delighted to be in a position to help the Hospice a further.”

Corporate and social responsibility is high on the agenda for Midshire, who took part in several other charity and fundraising events in 2016. These included a run for Cancer Research UK, the London Marathon in support of Francis House, which offers care to terminally ill children, and a Christmas Hamper appeal for the elderly and vulnerable of Solihull.

The company pledges to organise and take part in a number of charity events this year, so look out for future news and get involved!