Go ON is a national campaign to promote digital inclusion. The key focus is to bring the benefits o the internet to every individual, organization and community in the UK. Midshire are supporting the go ON Manchester campaign with the loan of hardware, including a Sharp BigPad – a large interactive TV screen.

Midshire have also offered two volunteers, Laura and Kim, to work from 10am till 12pm on Thursdays and Fridays for the duration of October at the Whitemoss Centre in Charlestown.

The role of a go ON volunteer is to help people get online and see the benefits of using the internet for searching for jobs, doing shopping, paying bills and keeping up with family and friends.

See www.go-on-manchester.com for more information about the campaign

Today we arrived at the centre for 9.45, and met Collette, the woman in charge of the go ON campaign in Charelstown. The centre was also hosting ‘Job Club’, so we found ourselves bombarded with people who had basic IT skills, asking us to help type up their CVs so they can then apply for jobs online, since that’s how most jobs are advertised now. I personally had to help a man sign up for his Job Seekers Allowance, which is now done online. He had no IT skills at all, so I sat with him clicking buttons while he told me what boxes to tick etc. It took us almost an hour to just complete the form, however by attending the session, he was able to learn how an online form works, rather than just speaking to a person over the phone.

Kimberley helped a girl who has come from Nigeria to write a CV online and print it off so she can go and apply for jobs. Due to her lack of IT skills she was not able to get a job as she didn’t have an electronic format of her CV. Kimberley made sure the document was formatted in a professional manner, giving her the best chance of getting a job. She was so happy with Kim’s assistance, and left the centre skipping with joy! We’re excited to return tomorrow, when it is just the computer session, not the Job Club too.

Today was a quieter session. As we arrived, a man turned up 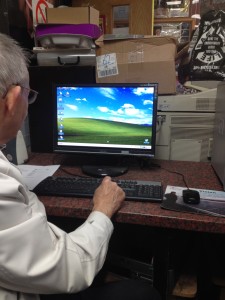 with the go ON leaflet, which was in his newspaper. He wanted to know how to use the Internet to search for bus timetables and to look at a magazine that he buys weekly. He also is looking for a new boiler so we helped him do a Google search to find some businesses locally. Due to us helping, he is now able to go to the library, and use the Internet himself, with more confidence.

We also helped a man use his email to receive a photo, which he then put as his profile picture on Facebook – he was so happy that we were able to do it quickly and easily!

We’re attending these sessions for the next 4 weeks, and hopefully through word of mouth, we will be able to help more people.