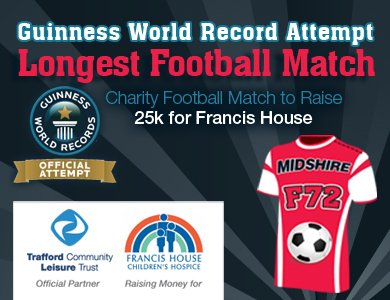 Business and print solutions company Midshire has announced its headline sponsorship of a Guinness Record attempt on staging the world’s longest football match.

The Midshire F72 marathon match and the Guinness record attempt is planned for May 2013 and is spearheaded by the company’s top salesman – and football enthusiast – Nick Rose.

As for the match, it is expected to last the equivalent of at least 48 ordinary games, back to back, and will take place at a location to be confirmed in Cheshire.

“I knew that I wanted the event to be football related, due to my passion for the sport. I’m also a fitness enthusiast, and so the ‘marathon’ element of the idea really appealed to me. It’s obviously going to be tough, but as they say: ‘no pain, no gain’,” said Nick.

People and local businesses should get behind Midshire F72 because it is going to be a massive event of which Stockport can be proud. We are all hard working lads who want to make a difference to the lives of some of the children and families at the Francis House Children’s Hospice, and all funds raised will go to the hospice. But we are also trying to bring a world record to Stockport and there have got to be plenty of people out there who’d like to be a part of a bit of history in the making.

“We still have places on the teams, and would be very interested in talking to anyone who would like to take part.”

Asked to predict the score Nick said: “How do you predict a score for a 72 hour football match? However I think the winning team will probably need to score around 500 goals”

He added: “We are delighted that Midshire Business Systems have made a very substantial donation, and have agreed to be the named sponsor of the event. I have worked for Midshire for a long time, and the support of Julian Stafford (MD) has been a consistent theme throughout.”

Nick is 26, is from Stockport and married his girlfriend of ten years, Vicki, last year.

All funds raised will go to Francis House, the Didsbury hospice for children with life-threatening or life-shortening illnesses.