Thunder Netball have been sponsored by Midshire for some years, and we have been delighted to be instrumental in their success on the court. Thunder Netball  are heavily involved with charity work, and their most recent venture has left a group of girls in Ghana very happy, by providing them with some of the smartest netball dresses in the region.

The scheme was set up through a partnership between Oldham Hulme Grammar School and the Seventh Day Adventist (SDA) Junior High School in Kwahu-Tafu, Ghana. A party of 20 students and three teachers went out to Kwahu-Tafu this summer, with the netball dresses in tow, to carry out building work and improvements in the school, which were arranged through a charity called ‘Friends of Tafu’.

The girls at SDA Junior High School play netball, as they aren’t allowed to play football. Their version of netball is fairly rough – with the girls from Oldham Hulme Grammar being bitten, kicked and scratched (but all in a very good natured, extremely competitive way). 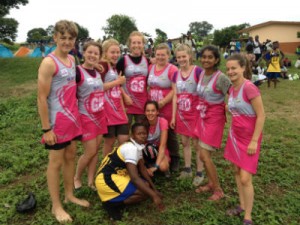 The netball pitch in Ghana is very makeshift – the girls in Kwahu-Tafu use a rough, unmarked field with posts made out of wooden poles (one of which was broken, so was several inches shorter than the other), clearly nothing like the pitches used by Manchester Thunder! The girls love to play netball, but have no training and, due to limited supplies, have to steal footballs from the boys.

Oldham Hulme Grammar School took two full sets of dresses with them to Kwahu-Tafu, which have both gone to the team at the SDA Junior HighSchool.  They will be the only team in the region (if not the whole of Ghana) who will now be able to play netball in proper kits!

Prior to the donation, the girls played in their school uniforms as, like the majority of children in Ghana, they can usually only afford one school uniform, and one casual outfit.

The girls who received the dresses were aged between 14-18. The Ghana education system is different to that in the UK, with children being categorized by ability rather than age. Although education is theoretically free in Ghana, the government doesn’t provide school uniforms, pens and pencils and exercise books.

The cost of theses things- as well as the need to work to put food on the table – often prevents the children from going to school, sometimes for months at a time. 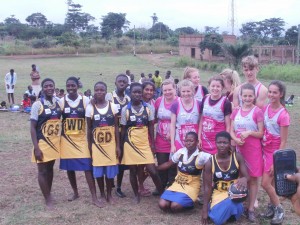 The support offered by Oldham Hulme Grammar School, recognising the importance of education to these children, is hoping to help more children attend school full time through a ‘needy student’ fund.

The girls are over the moon with the netball dresses, and a couple of old trophies that were also donated, which will encourage competition and relations between the different schools. The next venture is to take more netball kits and balls out to Ghana, along with football kits for the boys.

John Dalziel, a teacher from Oldham Hulme Grammar School who went out to Ghana, commented: “We all had an amazing time in Kwahu-Tafu and it will change our outlook on life for good. Our visit did have a huge impact on the children there too, and we want to make sure that this is not the end of it.”