On Friday 5th July, Midshire held its fifthth annual race day, organized by Sales Manager, Danny Walden. There were five races on the day and the Midshire sponsored race was run by …. five horses.

The Midshire marquee was located just behind the winners’ enclosure and parade ring, allowing for perfect viewing opportunities for both the races and the parades. 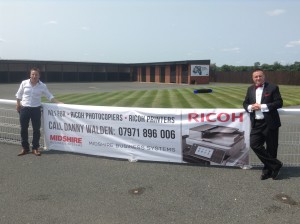 Midshire sponsored the third race: ‘The Midshire Business Systems Classic Maiden Stakes”, run by five horses. The ladies who attended the day were invited to judge the ‘Best Turned out Horse’ prior to the race, which involved looking at the neatness and presentation of each horse. Horse number five, Shaishee an Indian Charlie – Hatpin breed, was awarded the prize, with a unanimous vote.

Midshire held a competition for its sponsored race, in which the guests had to guess the order in which the five horses crossed the line. Those who guessed correctly won an iPad or a Sharp desktop printer. There were three winners, who each went home very happy with their prize!

A couple of the attendees from Midshire were, again, invited to present an award to the winning team, Highclere Thoroughbred Racing- Archer. The team’s horse Majesty was an impressive winner, winning by two and a quarter lengths from the favourite, Shaishee.

A couple of guests were then invited to a behind the scenes tour of the racecourse, with Huw Williams, the General Manager of Warwick Racecourse. The tour involved a visit to the commentary box, where they met Stewart Machin, one of the commentators for Channel 4 Races. Then they were treated to a snapshot of the long history of the racecourse with Huw, before finishing the tour at the weighing room, where several jockeys were preparing for their next race.

The day was a great success, with lots of winning bets being placed. We hope to have many more days at Warwick in the future, and host a similar event at a racecourse in the North West for customers of the Northern office.