Julian’s win as Technology Entrepreneur of the Year confirms Julian and Midshire’s drive and passion for providing cutting edge office technology solutions for businesses across the North West. The company was commended for their new hosted desktop solution – Desktop Monster, a cloud solution allowing people to work anywhere, anytime. 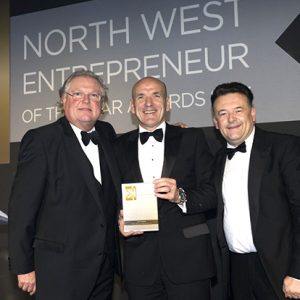 Julian has steadily grown Midshire Northern over an 18 year period, from having zero customers and two employees in 1997, to now supplying over 1,700 customers and servicing over 4,000 machines in the field. Now employing over 65 staff, Julian has also opened a further two regional offices in Sheffield and Wales, launched an IT services arm to the business and created a new integral partnership with global manufacturer HP.

As well as driving Midshire’s success, Julian works hard to support the local community through sponsorship, charitable fundraising and technology support, raising over £150,000 for local charities in the past two years alone.

Julian comments: “Whilst I understand it’s my name that gets recognized, none of this could be achieved on my own. Business is a team sport and I am lucky to be surrounded by the most amazing group of talented and hard working people. It’s my team that have put Midshire where it is today.”

The Talk of Manchester Awards is by nomination only and winners are decided purely based on public votes, to vote for Midshire here: https://svy.mk/1Rs72X8