Dubbed the best office in Manchester when unveiled in 2013, the latest upgrade to the Control Tower at Manchester Airport has been handled by Stockport-based technology provider Midshire®.

Midshire has just completed a complex IT installation at the Tower to accommodate the building’s innovative window system. 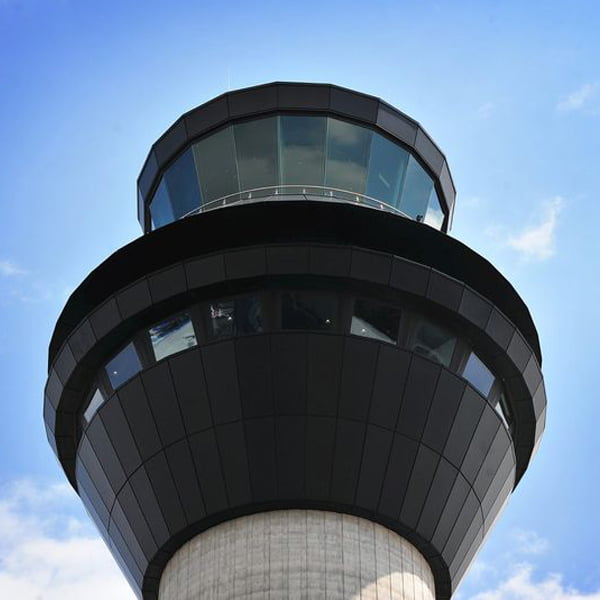 With a crucial 360-degree panoramic view Control Tower operators use leading edge radar monitors and displays to manage take off and landings, but uninterrupted visibility via a state-of-the-art window system is key.

Each pane of glass in the Control Tower is hinged in the middle at either side, so they can be turned a full 360-degrees and be cleaned regularly with minimum disruption to operations.

Midshire used desk mounts, pole girders and articulated brackets to enable all IT equipment, monitors and screens to move in multiple directions and not impede access to the rotating windows.

The Tower is home to more than 70 different systems, 100 computers, plasma touch displays and other communications equipment, which is used to monitor weather, control mapping and flight traffic.

Overseeing the work for Midshire is expert installer and Technology Sales Manager, Stuart Carruthers, who has been with the business over 15 years.

He commented: “It was a bespoke solution from us to a challenge within a unique environment – that’s what we are good at.”

Officially opened on the airport’s 75th anniversary four years ago, the 60-metre-high control tower is the second largest in the UK, after Heathrow and is the nerve centre of flight operations.

It manages the safe transit of over 60 airlines worldwide taking over 19 million passengers to over 200 destinations every year.