Two members of the Midshire Northern team took part in the Tough Mudder event on September 13th. The course was a gruelling 12 miles, and was held at the Cholmondeley Estate in Cheshire.

Tough Mudder aims to challenge even the hardest of competitors. With obstacles intermittently spread through the course, it is not just a straight run to the finish. Some of the hurdles include: the Electric Eel, Hero Wall and Everest. 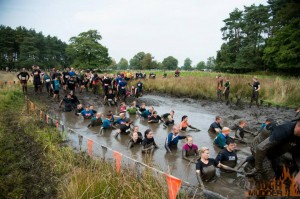 Dave Warren explains, ‘Tough Mudder uses the tag line “possibly the toughest event on the planet”, I think it’s safe to say we know why now.

It was tough but it was also incredibly fun, we had a team of 8 altogether and each of us helped not only our team but also complete strangers to complete some of the obstacles, some of which it would be impossible to do without at least 3 people. The low point for me was in “Electro Shock Therapy”, being electrocuted so bad that I fell to the floor and both my legs cramped up so I couldn’t move. The high point was seeing the rest of the team ready to literally drag me out!

As we had completed a previous Tough Mudder we were rewarded with an extra 4 obstacles and some more running to do, sounds harsh but the fourth extra obstacle was a giant waterslide (Result!).’

‘I loved it last year and loved it even more this year. The best thing about Tough Mudder as a challenge is the camaraderie. It’s not about getting to the finish line first, it’s about crossing it together as a team and helping everyone who needs it along the way.’

Macmillan offers support to those people suffering with cancer, and their families. This support can come in many forms, including, emotional, financial and medical.

Dave Warren explains why the team decided to raise money for MacMillan.

‘Including Gift Aid we have raised over £700 for MacMillan Cancer Support, a cause close to my heart as they helped me and my family when my dad was diagnosed and lost his fight 5 years ago.’

Having completed the challenge last year Dave and Anthony were keen to complete the event again this year, and are aiming to go one step further next year. They have both signed up to run it twice!