It’s official; Nick Rose & Midshire F72 have given Manchester a new title – the home of ‘The Longest Marathon Playing Football’ after being awarded the Guinness World Record for their 72 hour football match.

Let’s rewind back to 2nd May 2013. Midshire’s self confessed football fanatic, Nick Rose, and 35 of his friends of varying ages and levels of fitness took on the challenge of breaking the record set in the Netherlands for the world’s longest football match. The proposed football match would last for three solid days – a grueling 72 hour-long game (the equivalent of 48 ordinary matches) which, if approved by Guinness, would smash the Netherland’s 62 hour World Record.

Guinness World Records is the universally recognised authority on record-breaking achievements. Distributed in more than 100 countries and translated into 20 languages, the annual Guinness World Records book is the best-selling copyrighted title of all time, and one of the world’s best-known brands in the world with 98% prompted recall in English speaking world.

Evidently, achieving the World Record was no walk in the park. Over the 3 days, the players pushed themselves to their physical and mental limits.

But it took more than just the 36 men running (or hobbling) around on the pitch for 72 hours to achieve the world record. Leading up to the event, the teams undertook a strenuous training regime for several months to build their fitness levels and stamina. Additionally, behind the scenes, planning and preparation was key in ensuring the attempt was a success.

For adjudication purposes the whole match had to be recorded, from all angles, on video for Guinness to watch back.

Volunteer referees from Manchester and Cheshire FA, and a rota of witnesses and score recorders, were recruited in similar shifts to the players to ensure the match ran smoothly. Guinness required 3 witnesses, at all times, to keep record of every aspect of the match, including each of the 1,065 goals scored, substitutions, injuries, penalties, and any cards. 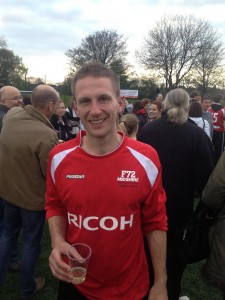 Friends and family gave up their days and nights to sit on the sidelines to cheer the guys on and ensure that they kept a record of every aspect of the match. Physiotherapists cleared their diaries for the duration of the match to support the footballers, offering sports massages and taping up injuries, around the clock, to ensure the guys could stay on their feet until the end.

The match was not solely a World Record attempt, but also a fundraising event for local charity Francis House Children’s Hospice. The initial aim was to raise £25,000, which at first people thought of as an impossible task; however, through the sheer determination of Nick and everyone involved, amazingly the final figure was almost double the initial aim at £45,195.44.

Francis House provides appropriate care for children and young people with life threatening conditions and the necessary support and short-term rest for their families. The hospice helps over 240 children and their families from all over Greater Manchester each year. When families come to Francis House, they find a place of rest, fun, and enjoyment in a comfortable home-from-home environment. The annual running costs of Francis House are £3.5m, so the money raised by F72 will greatly help the hospice. 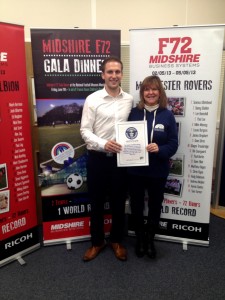 Kate Puc Fundraising Officer for Francis House said: “I received a telephone call first thing Monday morning from a very excited Nick Rose telling me they had received notification from the Guinness Book of Records – this was now the icing on the cake. Not only had they reached their goal by playing the longest game of football in the world and having surpassed their fundraising expectations of raising £25,000 to actually raising £45,195.44 for Francis House Children’s Hospice; now Midshire F72 has received the accolade of being entered into the Guinness World Book of Records.

“This is an acknowledgement of certification that they are the title holders of ‘The Longest Game of Football’. A fantastic achievement, not only from a personal aspect, but from a fundraising one too.

“Huge thanks and Congratulations to the 36 lads who took part in this football game of endurance. They are so deserving of this award. Not forgetting all the volunteers and supporters that helped them along the way to achieve it too.”

It has been a busy five months since the match ended. In this time, there has been a gala dinner to celebrate the success, the final amount of money was revealed and Nick was shortlisted as Stockport Business Person of the Year.

Nick Rose said: “We are all very proud to have brought the Guinness World Record to Manchester. After shattering our fundraising target for Francis House, claiming the record really does bring the event to a close in a very special way.

“I would once again like to thank every single person that got involved, or supported the event, in one way or another, as it really was a true team event. Let’s hope we can keep hold of the record for a little while. We’re not ready to get those tents back out just yet!”

Adrienne Topping, Marketing Manager at Midshire, said: “This is a huge achievement for everyone involved; we want to express our congratulations to the MidshireF72 players, referees, witnesses, families, friends and support staff. To bring this kind of sporting accolade back to Manchester is phenomenal; the fact that such a significant amount of money was raised off the back of it just makes this extra special.”