The Possibilities of 3D Printing - Office IT Equipment | Midshire

3D printing – the possibilities are endless

3D printing is a pretty incredible technological breakthrough, and holds the potential to change so much in the world with its extraordinary capabilities. The very first 3D printer came to be in 1983, and ever since then the concept and 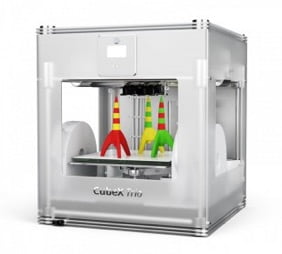 technology of printing real life objects has flourished, making a considerable impression in various fields such as art and science.

Developing such a sophisticated technology does not come quickly or easily, and it has taken over 30 years to come as far as it has. Some critics are still quite skeptical of 3D printing and its potential. When 3D printers were first introduced the cost of a machine was very high. As the technology had developed this price is decreasing as the popularity grows and more entry-levels machines are coming to market. It’s important to focus on how far technology has come, and how much potential there is for future growth and improvements. At this stage of the game some pretty remarkable things are already being created with the use of 3D printing techniques.

There have been several successful printings of very interesting and useful items, such as musical instruments, clothing and even vehicles. Some of the more promising prints have included a completely edible pizza that was the result of a NASA funded project aimed at feeding astronauts printed food when on voyage, and the extraordinary advances made in printing body parts and other human tissues including ears, skin, blood vessels and even kidneys (although not yet functional).

3D medical printers use a gel like substance created from cells, allowing doctors and medical professionals to help and heal patients with countless numbers of injuries and illnesses, and potentially even prolonging the human lifespan considerably as the technology continues to develop.

The future of 3D printing

As this exciting technology continues to progress, 3D printing, also referred to as additive manufacturing, will become more economically feasible as the process becomes less costly, and 3D printers will be available in lower priced desktop versions, making them more attainable to a wider range of people. It is also anticipated that printing speeds will improve considerably, by as much as 500 times.

Printing capabilities will also be improved greatly, with the industry about to break through on many printables, including anatomical models to aid in CT scans and MRIs, bio printing live tissues for medical testing, creating automotive parts and endless other possibilities. With technology progressing faster than other it won’t be long before the world sees some amazing things happen thanks to 3D printer technology.