Laser Printer - a history of the technology | Midshire

Laser Printer – A history of the technology

Laser technology is at the heart of the printer industry, with everything from the smallest printer to the largest production printer relying on the technology to transfer digital images 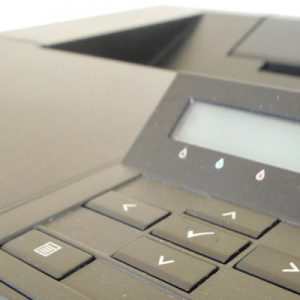 In this blog, we are going to delve into the history of the laser printer, looking at how it came to be in existence and how it has become one of the most useful products we have today.

How the printing process began

The printing press was introduced in 1440, and was a product that applied pressure to an inked surface resting on a print medium, therefore transferring the ink. As one of the first ways to create a printed product, it was widely regarded as one of the most influential events in the second millennium, and led to the first mass production
of books in Europe.

However, technology has fast forwarded a lot since then and we now have a huge range
of printers and photocopiers made up of clever equipment and machinery. In 1953 the first high-speed printer was developed by Remington-Rand for use with the Univac computer, and in 1976 the first inkjet printer was invented.

The history of the laser printer

Slightly earlier than this, in the 1960s, an employee in the product development department of Xerox Corporation had the idea of using a laser beam to ‘draw’ an image of what was to be copied directly on to the copier drum. This technology became the method by which laser printers work today.

The first commercial implementation of laser printers came from IBM with the IBM 3800 in 1976. Designed for data centres, it was used for high volume printing on continuous stationery, printing at 215 pages per minute. In 1979 Japanese company Canon developed a low-cost desktop laser printer, the Canon LBP-10.

The first laser printer intended for mass-market sales was from Hewlett-Packard; the HP LaserJet, released in 1984. It was quickly followed by printers from Brother Industries and IBM, to name a few.

How the laser printer works

A laser printer essentially works by your computer sending a stream of electronic data to your printer, where a laser beam scans back and forth across a drum inside the printer. This builds up a pattern of static electricity, which attracts toner on to the page. This toner is a kind of powdered ink. Finally, a fuser unit bonds the toner to the paper.

Technology has developed over the years and brought us all sorts of clever devices that have a range of additional features. Printers and photocopiers can now do so much more than just produce a document.

With the growth of technology use in the office, the laser printer has developed into multifunctional devices, which are able to scan, fax copy and print. This has ensured that laser printing technology is one of the most important technologies in the office environment.