The Cloud A Short Guide - IT Guide Part 4 | Midshire IT

You Are Here Information Technology – A Complete Guide 4. The Cloud

The Cloud is a type of internet-based computing that provides computer resources and data to users via their internet enabled devices, on demand. The Cloud gives employees instant access to a secure pool of shared resources including: servers, storage, applications, and computer networks. The ‘cloud’ is essentially an off-site data centre, which companies can buy portions of to store any type of electronic data, and can be scaled up or down as necessary.

4.1 History of the Cloud

The earliest references to cloud computing, in its modern sense, appear in internal documents from computer developer Compaq in 1996. The term did not become popular until global ecommerce giant Amazon introduced its Elastic Compute Cloud in 2006, which allows users to lease virtual computers from which they can run their own applications. ‘Cloud’ became the common name for the technology as the original programmes used to draw network schematics surrounded the icons used to illustrate servers in a circular shape. Clusters of server diagrams had several overlapping circle icons, which often resembled a cloud.

Use of the cloud is now so popular and widespread that software such as desktops and, website software are often stored in it, and popular consumer devices like smartphones offer cloud storage as standard.

Infrastructure as a Service (IaaS) 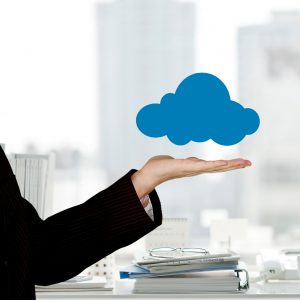 IaaS is widely regarded as the most basic form of a cloud-service model. Defined as the ‘composite hardware, networks, software, and resources required for the operation of an enterprise’, IaaS provides a complete computing structure via virtual machines that imitate a computer system’s architecture. By using hypervisors (a type of software, hardware or firmware), IaaS runs virtual environments for employees as guests. IaaS usefulness comes from the way it removes the need for businesses to manage a complicated IT infrastructure. Components such as the physical hardware, data partitioning, security, scaling, and back-ups are managed by the service provider.

Platform as a Service (PaaS)

In PaaS, the cloud provider delivers a platform which typically includes several components of a business IT infrastructure, including: the operating systems, database, web server, and programming-language. Usually offered to application developers, underlying storage and computer requirements are automatically scaled to match app demand. This is useful because the user does not have to allocate resources for manual updates.
Software as a Service (SaaS)
In SaaS, users gain access to their necessary data, databases, and software. SaaS providers install and operate the software for applications within the cloud, and users are then able to access the software using cloud clients. Cloud providers manage the platform and complete infrastructure of a business by maintaining and supporting the apps employees use externally.

Desktop as a Service (DaaS)

With Daas, the service provider will manage all aspects of back-end responsibilities such as data storage, security, upgrades, and back-ups. DaaS usually copies personal data to and from the virtual desktop during log-on and log-off, with access to the desktop being device, location and network independent. Some DaaS providers will offer sector-specific services, such as hosted desktops for the legal sector or for multi-site organisations.

Private cloud refers to an internet-hosted cloud infrastructure that is operated for the use of a single organisation which can be managed both internally or by a third-party service provider, and can be hosted on or off of a business’ premises. Holding a private cloud data centre on-site, requires a huge amount of engagement from staff and is a significant initial capital expense. It requires employees to re-evaluate existing resources and consider security measures at every step, as well as the allocation of space, environmental controls and hardware needs for each area of the business.

The cloud is often referred to as ‘public cloud’ when services are provided via a network that is entirely open for public use. Technically speaking, there is little to no difference in the architecture used by public and private cloud services. The main variance is security, which is often much tighter in private cloud, and one of the main reasons businesses choose private cloud services today. Public cloud providers usually manage and operate the service from their data centre, ensuring security is still tight, which the public can gain access to by using the internet.

A hybrid cloud is defined as a composition of two or more types of cloud, that remain entirely separate entities, but are bound together in some way, offering all the benefits of multiple cloud deployment models. Users normally opt for a hybrid service if they are seeking to extend their capacity or capabilities, by way of aggregation, customisation, or integration with another cloud service. For example, a business may hold data on its premises in a private cloud network, but connect that network to a public cloud service to gain access to business intelligence software that helps manage the data.

Any cookies that may not be particularly necessary for the website to function and is used specifically to collect user personal data via analytics, ads, other embedded contents are termed as non-necessary cookies. It is mandatory to procure user consent prior to running these cookies on your website.